Archive for the ‘District of Columbia’ Category 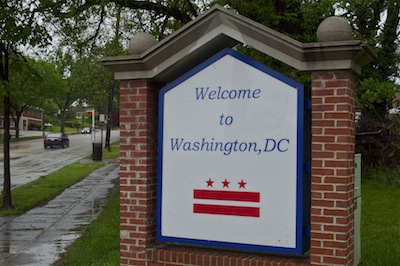 After taking a 1-week break from my trip (flying back to the Bay Area), I resumed the trip in Washington, DC. This was my third visit to Washington, but my two previous visits were in November (when it was cold), so it was nice to finally get to visit the city – with its many outdoor monuments – during warm weather.

I arrived in Washington one day after the stunning announcement that Osama bin Laden had been killed by US forces. The previous evening, there had been reports of hundreds of people massed outside the White House, in celebration. One day later, however, there were only about 100 people outside, and most of those were probably just regular tourists like me.

My favorite part of Washington DC is the Smithsonian Institution. Before I first visited Washington DC (about 12 years ago), I thought that the Smithsonian was a single (large) museum. It’s actually a collection of more than a dozen museums, spread throughout the city, although mostly on the National Mall – a large park in the center of the city.

Of all these outstanding museums, by far my favorite is the National Air and Space Museum. This remarkable museum contains many of the most famous aircraft and spacecraft in history, including:

The museum also contains the Apollo 11 Command Module (the only part of Apollo 11 that returned to Earth), and moon rocks brought back from several of the Apollo missions.

For the larger aircraft – too large to fit within the main museum building – the museum has a separate hangar. (This part of the museum is actually a few miles away, in Virginia, but because it’s logically part of the Air and Space Museum, I’m describing it as part of my visit to DC.)